Caladrius is the result of a 4 month internship with Twitter’s Real Time Compute team. It is a service that interfaces with the Heron stream processing system and models the performance of topologies running within it. Caladrius has the ability to predict future incoming workloads (based on sufficient historical data) which allows the performance of a running topology to be checked against that expected workload, giving the option to pre-emptively scale the topology before that workload arrives.

The (very alpha and not yet production ready) code has been open sourced (under the Apache v2 Licence) and is available on GitHub. Further details about the features and operation of Caladrius are provided on the documentation site (which will be heavily updated over the next few weeks).

My PhD research (as part of Newcastle University’s Center for Cloud Computing for Big Data) is focused on modelling the performance of distributed stream processing topologies, like those that run inside Apache Storm. The PhD section of this site has more details and explanations of the systems and terminology used in this post.

In the summer of 2016 I attended the Distributed Event Based Systems (DEBS) conference in California, where I was presenting my work as part of the conference’s Doctoral Symposium (you can find the paper I presented here). The keynote speaker at DEBS that year was Karthik Ramasamy, who at the time was the Engineering Manager for Twitter’s Real Time Compute team, which handled their stream processing system. His talk focused on their replacement for Apache Storm (the system I was using as the basis for my research) with a new system called Heron. At the end of talk he listed some continuing challenges in stream processing, one of which was scaling the topologies to the correct size to meet the expected incoming workload. Their engineers were spending days and weeks tweaking the production topologies. The main issue was that the loop: deploy topology > wait for it to stabilise > analyse the performance > tweak > redeploy the topology was very time consuming and would have to be repeated multiple times to get the topology to perform at the required level.

It seemed to me that if you could model the performance of a topology before it was deployed, then you could skip several of those steps and reduce the time taken to scale the topology. I remember him saying:

“If anyone one thinks they would be able to help with this, come and see me at the coffee break…”

I duly chewed his ear off (a delightful English phrase implying I talked incessantly to him) at the coffee break and after nearly 2 years of emails, video calls, Slack chats, Karthik leaving Twitter to start a new company (Streamlio), connecting with the new team leader (Maosong Fu) and passing Twitter’s intern application process, I started at Twitter’s San Francisco HQ in March this year.

So, in computer science, naming things is one of the two hard problems (along with cache invalidation and off-by-one errors). When you start a project you need to call it something and the Heron Topology Performance Modelling Service (HTPMS) didn’t exactly roll off the tongue. So I wanted a single word name for the project that was in some way linked to the Heron. Recently a auto-scaling framework for Heron (and other stream processing systems), called Dhalion, had been introduced by researchers at Microsoft (Avrilia Floratou and Ashvin Agrawal, who I had the great pleasure of meeting in my first few weeks in California). Dhalion is the Greek word for the legendary bird that is said to be able to take the sickness into itself and then fly away, dispersing the sickness and healing both itself and the sick person. 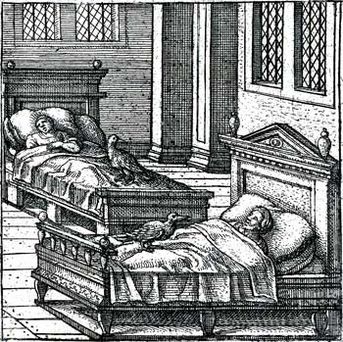 Thanks to the wonders of Wikipedia I discovered that the Roman version of the Dhalion legend is called Caladrius. I hoped that the modelling service I was building could one day integrate with Dhalion and this, along with the fact Caladrius was also a bird (so seemed apt for a Twitter based project), made it feel like the perfect fit. And that, dear friends, is how Caladrius got its name.

As a side note, I wish more open source and academic software projects would explain their names (The Dhalion paper had a wonderfully informative footnote to this effect).

Initially, my goal was to directly apply my research from Apache Storm to Heron, which is designed to be backward compatible with Storm topologies. The idea was to intercept proposed topology physical plans (called packing plans in Heron) and model their expected performance, perhaps integrating the system into Heron’s existing command line tool as part of the update --dry-run option.

However, as I dug deeper into the Heron code it became apparent that there were significant differences between how Heron and Storm handle the partitioning of state within the steam operators (instances in Heron and executors in Storm). Storm’s state management approach (using a set number of Tasks to create a pre-defined key partition space) allows me to predict how key based (fields) connections will route keys when the number of downstream operators changes. Heron’s approach (with no fixed Tasks or pre-defined key partitioning) mean that this is not possible. So for the time being predicting the performance of proposed changes to a topology was out the window.

This meant that I had to pivot to a new plan. I decided to focus on modelling the performance of a currently running topology and use that model to predict the effect on that topology of different incoming workloads (traffic).

Caladrius provides a REST API by which you can supply a traffic level for a given topology running on your Heron cluster. It will talk to the Heron Tracker service and configured metrics databases to create a model of the topology, returning a prediction of the topologies performance. This currently takes the form of arrival rate predictions for all the topology’s operators and a check for back pressure issues.

Caladrius also provides a way to predict the traffic into a topology (provided a sufficient amount of historical traffic data is available). This feature uses the open source Prophet library (from Facebook) to build a model of the traffic and predict a given amount of time into the future. This predicted traffic level can then be fed to the performance modelling service, allowing Heron users to check, ahead of time, if their topology is likely to experience slow downs or back pressure issues.

There are some caveats to the types of topologies that can be modelled and these are described in more detail on the documentation site.

What will Caladrius do in the near future?⌗

Given the short time frame in which Caladrius was created there are many areas that can be improved upon. Caladrius is still under active development at Twitter, with interns who came after me continuing the research and testing the system against Twitter’s production topologies. Together we are working to flesh out the performance prediction code (to include resource usage predictions), simplify the REST API and improve the overall performance of the modelling process.

As I mentioned above, the original plan was to have Caladrius predict the performance effect of a change to a topology’s physical plan. Even though this is not feasible with Heron currently, there are plans to introduce changes to Heron’s stateful processing code that will make this kind of prediction possible in the future.

Once these changes are completed Caladrius can be extended to allow a fully pre-emptive scaling approach. A topology’s incoming traffic level can periodically be predicted with the effect of that traffic level assessed using the current performance model. If this indicates that there will be an issue, one of the many optimising packing algorithms or scaling systems like Dhalion can be employed to create new packing (physical) plans for the topology. These proposed plans can then be modelled allowing the best plan to be selected and deployed before the problematic workload arrives at the topology.

Currently, the performance modelling system is based on a queuing theory approach and the traffic prediction uses the Prophet modelling package. However, Caladrius is designed to be extensible. Multiple models can be configured and run on each topology. My hope for Caladrius is that is could be used as the basis for further research in this area. Researchers and engineers can use the metrics interfaces, graph database facilities and modelling code that Caladrius provides to quickly get up an running with the data they need to develop new modelling approaches.

As Caladrius is built to be extensible, I also intend to adapt the code I have already written for performance modelling of Apache Storm topologies into the system. As with developing multiple models, it is also my hope that Caladrius could be used to model systems other than Heron and Storm, such as Apache Flink or Spark. This would allow a single Caladrius instance to be used with multiple stream processing systems and compliment their auto-scaling efforts.

Firstly, Karthik Ramasamy for listing to an overly excited PhD student all those years ago and continuing to provide advice. Maosong Fu for listening to my proposal and letting me join his team. The Twitter Real Time Compute team: Huijun Wu - for mentoring me, - Ning Wang for being so friendly, Neng Lu - for being a great technical interviewer and to all of them for putting up with my constant questions! The Heron community were (and continue to be) a great help, I think the slack channel are sick of hearing from me!

Thanks go to Remy DeCausemaker, of the Twitter Open Source Software team, for his help in shepherding Caladrius through Twitter’s OSS process.

I would also like to that Faria Kalim, who is a summer intern with the Real Time Compute team and has been given the unenviable task of continuing the development of Caladrius!

Finally, I would like to thank my Supervisor Dr Paul Ezhilchelvan for his continued patience and support and the EPSRC Cloud Computing for Big Data CDT at Newcastle who have provided the environment (and funding) to make this research and internship possible.